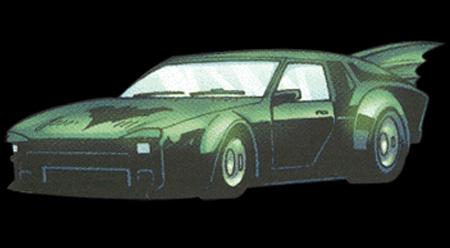 Ever since the events of "Hush," the idea that Jason Todd is still alive has haunted Batman. Later, when a Red Hood came to Gotham claiming to be Jason, Batman was forced to face the idea head-on. Part of his investigation was the exhumation and dissection of the empty coffin Jason was buried in. As he worked, the meeting of Batman and Jason in crime alley was retold through flashback.

That Batmobile was the focal point of their meeting, and the Batmobile (like the dialogue) used in the flashback was a reinterpretation rather than a direct repeat. Specifically, the car used in the flashback was a Pantera GT5, with additional fender flares, ground effects, air dam, and bat fins. The hood decoration was also changed, from the simple black panel with yellow eyes to a flared bat, similar to Batman's chest emblem.