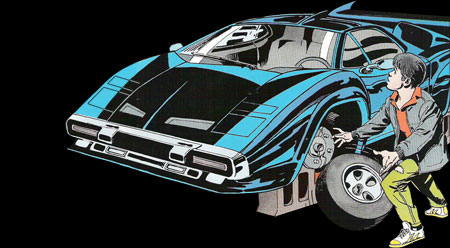 Crisis on Infinite Earths reset several aspects of the DC universe, one of the most notable being a new Jason Todd (Robin II) with a new backstory of an orphaned street criminal. The fateful meeting between he and Batman has been recounted several times over the years, but even before the actual story began, we got a glimpse of the encounter on the cover of Batman #408. For this art, the Batmobile is drawn as a Lamborghini Countach with several small modifications such as a bat mask hood, roof fin, and scalloped spoiler tips.