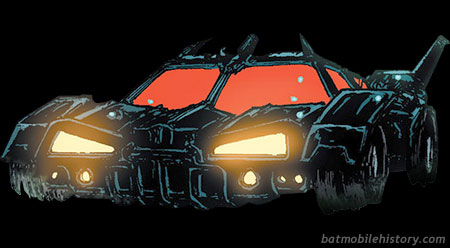 "Garland of Skulls" begins immediately after Talia Al Ghul blows the top several stories off a Gotham apartment building and injures several members of Batman, Inc. as a way of luring Batman into her trap. To arrive at the scene as quickly as possible, Batman uses this muscular Batmobile reminiscent of Eddie Newell's design in Legends of the Dark Knight #107 (given how much of Grant Morrison's Batman, Incorporated references esoteric Batman stories, this may be an intentional reference to a relatively little-known comic).